Bollywood is India’s Mumbai based Hindi film industry. The letter “B” in Bollywood comes from Bombay (Mumbai), the capital of Hindi film industry in India. Bollywood traces its start in 1911 when the first silent Indian feature film was released by D P Phalke. A central figure in the movement toward mass-appeal Hindi films was Raj Kapoor (1924-1988), a director-producer-performer.

I am sure everyone has a list of their own Bollywood evergreen movie , I am sharing my list with you guys :) 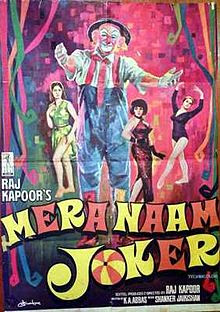 I consider Mera Naam Joker to be one of Raj Kapoor's finest movie followed by Sangam. Mera Naam Joker was Raj Kapoor's personal project,he invested millions and millions into MNJ only for it to fail miserably at the box office. Since it's release MNJ is regarded as a cult classic. Looking at the movie you can see where that money went,MNJ has cameos from Bollywood's leading actors:Dharmendra, Simi Garewal, Manoj Kumar,Rajendra Kumar,Dhara Singh and many more. Mera Naam Joker tells the story of a man who is lonely and unhappy and yet he spreads his happiness around the world dressed up as a clown. The music as per usual for a RK production is extraordinary, my favourite is Jeena Yahan Marna Yahn which has a haunting feel to it. It is a real shame that on it's release MNJ didn't get the recognition it rightfully deserves. MNJ is a unique movie experience that will touch people's heart and will remain fixed in their memory forever. 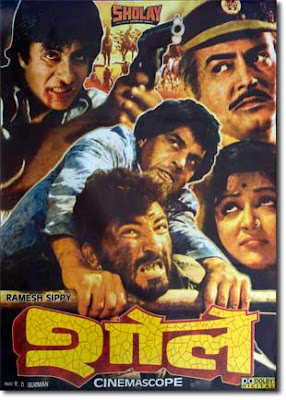 In the present, can you even think about a movie which can run on a theatre for 5 years? To say anything about Sholay will be quite inappropriate. Its the best masala movie India had ever produced. And its the only movie which had so many memorable charecters. “Yun Ki” my favourite will be Basanti because hamain zyada bolne wale log bahut pasand hain. 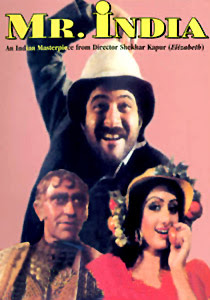 MR. INDIA is a cult film. Its humour was fresh and its theme was soulful. Arun Bhaiyya's victory of an underdog with an Electronic Gadget ! Such a great entertainer it was, really. Performance by Sridevi stood out, while Amrish Puri is even now for crores of Indians - MOGAMBO !! Anil Kapoor was very impressive too. Music also was hummable. my favourite is that Medley revolving around a Football. All n all, Mr. India is a Great Film !! 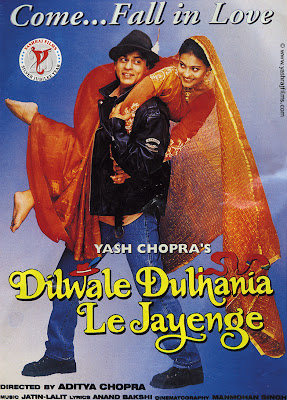 This alphabet was quite tough as there are many noteworthy movies starting with this one, but then the heart won over the head.

I don’t remember the number of times I have seen this one. What I really liked about the story was that although Raj and Simram never said anything to each other when they part ways after the Euro tour, still the guy had the courage and conviction to come after her to India. Pyar ho to aisa! A movie which never fails to warm my heart. 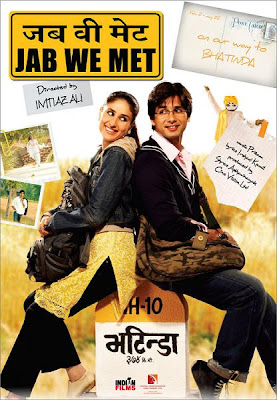 Jab We Met is one of my most favorite movies. The movie is so damn good I just cannot stop thinking about it. The characters are so lovable and adorable. The story is nothing great to be boasted about, but love stories are not meant to be thrillers. Just the special people and the special moments shared between them is what make it a great love story. And undoubtedly, Jab We Met has all that.

Email ThisBlogThis!Share to TwitterShare to FacebookShare to Pinterest
Labels: Bollywood