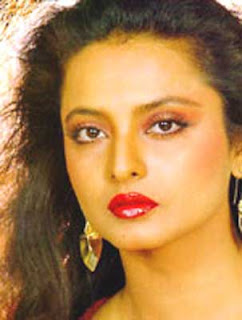 Bhanurekha Ganesan, better known by her stage name Rekha (born 10 October 1954) is an Indian actress who has appeared in Bollywood films. Noted for her versatility and acknowledged as one of the finest actresses of Hindi cinema, Rekha started her career in 1966 as a child actress in the Telugu movie Rangula Ratnum, though her film debut as a lead happened four years later with Sawan Badhon (1970). Despite the success of several of her early films it was not until the mid-to-late 1970s that she got recognition as an actress. Since the late 1970s, after undertaking a physical transformation, she has been featured as a sex sybmol in the Indian media.
Rekha has acted in over 180 films in a career that has spanned over 40 years. 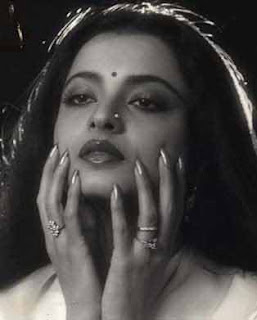 She is a versatile actress and is a true bollywood diva. Even today she looks ravishing & beautiful as ever.... 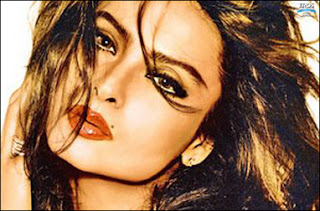 She is ever glowing & in shape !
In most of her public appearance she flaunts Kanjivaram sarees with dark hue lips like maroon/red and with a mogra gajra.Mostly she carried potli bag with her sarees. Some of her images in saree.... 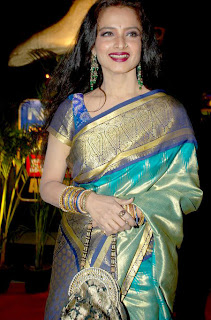 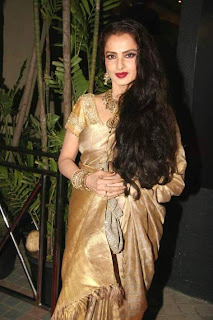 Her choice of jewellery is mostly traditional with sarees.
I think she has looked beautiful in most of the movie she acted in , but my personal favourites are Silsila & Umrao Jaan. And although I must have thought Rekha was a natural as Umrao Jaan, this time I was actually mesmerized by her performance.She was Umrao Jaan...Every bat of her long black eyelashes, every alluring glance, every purse of her ruby lips...she had it down to a science. Rekha made the perfect courtesan as she bewitched men with her charm, drawing them deep into her web of seduction. 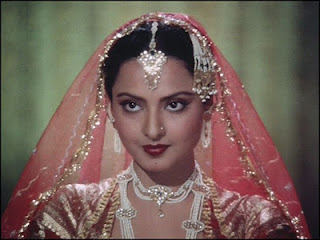 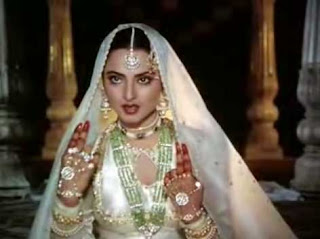 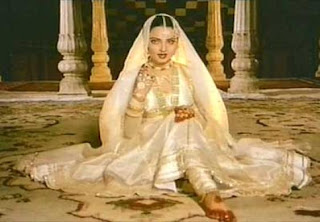 Yash Copra’s romantic drama Silsila was a controversial movie of its time simply because it portrayed an extra-marital affair and also because Amitabh Bachchan and Rekha were rumored to have a "real" affair at the time. However, after one watch of the film one can easily see that Silsila is far more than a controversy! It is a classic romance film made with Yash Copra’s magical style and despite its unfair Box Office status the movie remains a must see to this day!
Rekha as Chandni also gives a mature performance. She looks absolutely gorgeous and even that is an understatement. Although she has a few scenes to actually perform, she makes her presence felt with her breathtaking beauty. Though it is safe to say that in terms of acting Jaya Bachchan easily overshadows her. On the other hand, the chemistry that Rekha shares with Amitabh is arguably very strong and some of their romance scenes seemed very much like "real" life. 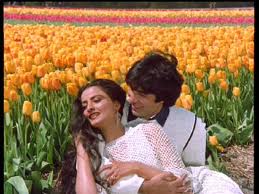 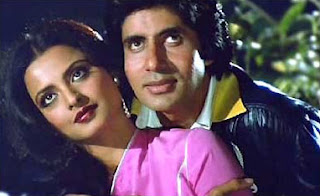 Hope you enjoyed reading this post :)
Posted by Unknown at 5:17 pm